I stumbled upon an unexpected definition of a familiar word recently.

All my life, I’d been so sure that I knew exactly what it meant. But as it turned out, I’ve been partly wrong all along.

Likewise, many people believe they know exactly what being a Highly Sensitive Person is all about. Turns out, they too may be at least somewhat wrong. 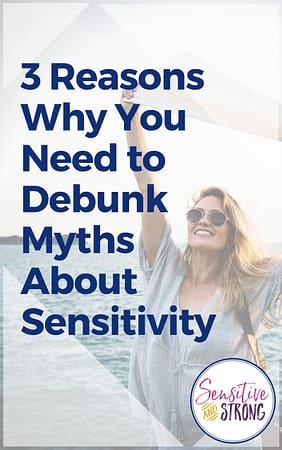 It’s up to us to intentionally and actively debunk myths about sensitivity. As we do, we help ourselves and others to:

1. Reveal the truth — the whole truth — about what it means to be a Highly Sensitive Person.

Is there some truth to each myth about sensitivity? Of course! But not the whole truth. And the problem with having a partial truth is that it easily becomes a stereotype … and even a prejudice.

We all need to be working with the whole truth—complex and messy though it may be!

2. Review potential decisions with the lens of truth about sensitivity.

When we believe a myth, then our choices are grounded in error. We act inappropriately. Or we get stuck in inaction and fail to act at all.

Knowing the whole truth about what it means to be an HSP facilitates wiser, more intentional actions. Better beliefs lead to better behaviors.

Under-the-radar bullying because of our sensitivity is a common—but largely unspoken—experience for us. Review our list of 57 myths, recalling the tone of voice used when they are spoken to you.

We need to stop accepting subtle bullying as normal and call it what it is: hurtful. It hurts us to be bullied, and it hurts others to behave as bullies.

Often they do so without meaning to. But unintentional bullying is still bullying.

And when no one speaks up, nothing changes.

That unexpected definition I ran across? It was for the word bullying.

When I read this on a Facebook meme, the third bullet point hit me in the gut.

So I’ve told myself Just don’t make any waves and pretended that the bullying I’ve experienced didn’t bother me. You’ve likely done the same, in your own way.

Will you join me in identifying myths about sensitivity and working together to debunk them? Because when we do, we help ourselves — and those around us — to believe bigger and behave better.

Together, we will be catalysts for change!

Feel free to respond in the comments here on the blog, over on our Facebook page, or email me directly at [email protected]