“What do you mean ‘she refused to perform at recitals’?”

Daniel glances up to see if I’m angry or amazed. (Both, actually.)

“You’ll have to ask her for details. All I know is that she took lessons from the same piano teacher you did. But she refused to perform at recitals.”

How was refusing to perform even an option for her?

Tears of astonishment and regret sting my eyes.

And why did it never occur to me? 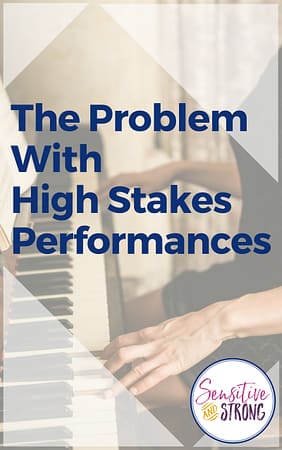 “How was refusing to perform even an option for you?”

We’re sitting together at a church potluck, and I have to ask.

As if it was no big deal.

“I didn’t want the pressure. I wanted to learn to play. But I didn’t want to perform. So I told my parents I would go to lessons, I would practice hard, but I wouldn’t go to recitals. Especially not the competitions. Those would have been the worst!”

The days and hours leading up to a performance, especially competition, were agonizing.

I chewed my fingernails to the quick.

And every time — every single stinkin’ time — I screwed up.

But on stage, for the big performance, when it actually mattered?

My breathing quickened. My fingers froze. My mind went blank. I played wrong notes. I stopped mid-way. I started over. (And over. And over. And…)

Then, for hours and days after, I felt terrible. Like I’d let everyone down.

My teacher, who was famous for her award-winning students.

My parents who were investing “good money” in me.

I was so focused on doing what the most important people in my life wanted, it never occurred to me that I might be letting someone else down.

It never occurred to me that I could refuse to perform.

“But performances are where a musician gets good.”

It’s a few days later, and Daniel is conflicted. He knows that my experiences with performance pressure turned me off to paino forever.

But his own experiences of singing with choirs, bands, and quartets had the opposite effect.

“Maybe some music students clearly have what it takes at an early age and others simply don’t?” I suggest.

“If that’s true, what is a teacher supposed to do? Tell a child, ‘Hey, kid, you don’t have what it takes. You should quit now.’ That’s not right.”

I agree. As teachers, we both know the importance of believing in every student’s potential.

This conversation is missing a vital piece.

We sleep on it.

“I’ve got it!” I tell Daniel the next morning.

“The problem was that I only played at high stakes performances. Big recitals. Bach competitions. Christmas concerts.

When you were singing with your high school choir, you sang everywhere: churches and cathedrals and nursing homes and elementary schools.

You had a ton of low-pressure performances. Practice performances, bascially. It’s not that they didn’t count. But they certainly weren’t all-or-nothing.

You’ve told me how crazy December was: 20+ performances before Christmas. By the time your big Christmas concert rolled around, was it really that big a deal?”

“Not at all. On the one hand, we knew, ‘This is it! We want this one to be our best!’ But on the other hand, there was an element of, ‘Here we go again…’  In fact, one year, the director had to tell me and Lori W. to quit switching parts, we’d gotten so bored of singing our own!”

He laughs and then grows serious.

“No. Nothing fun. Nothing where failure could be a learning experience, something to build on.”

“I take that back. My first piano teacher was different. I remember playing at Sligers Music in Redland during the Christmas season. I came across photos while sorting pictures for Mother’s memorial service, and I remember loving those ‘performances,’ if you can even call them that!

I was wearing a gauzy dress I loved, with my hair all done up in a beautiful bow. They had a schedule on the door of all the music teachers and students who were “performing” throughout the day.

A few chairs were set up in short rows near the piano in the window — I got to play by the window where everyone could see my new dress!!! A few shoppers would sit and listen, but it was mostly our mothers and grandmothers in the ‘audience.’ 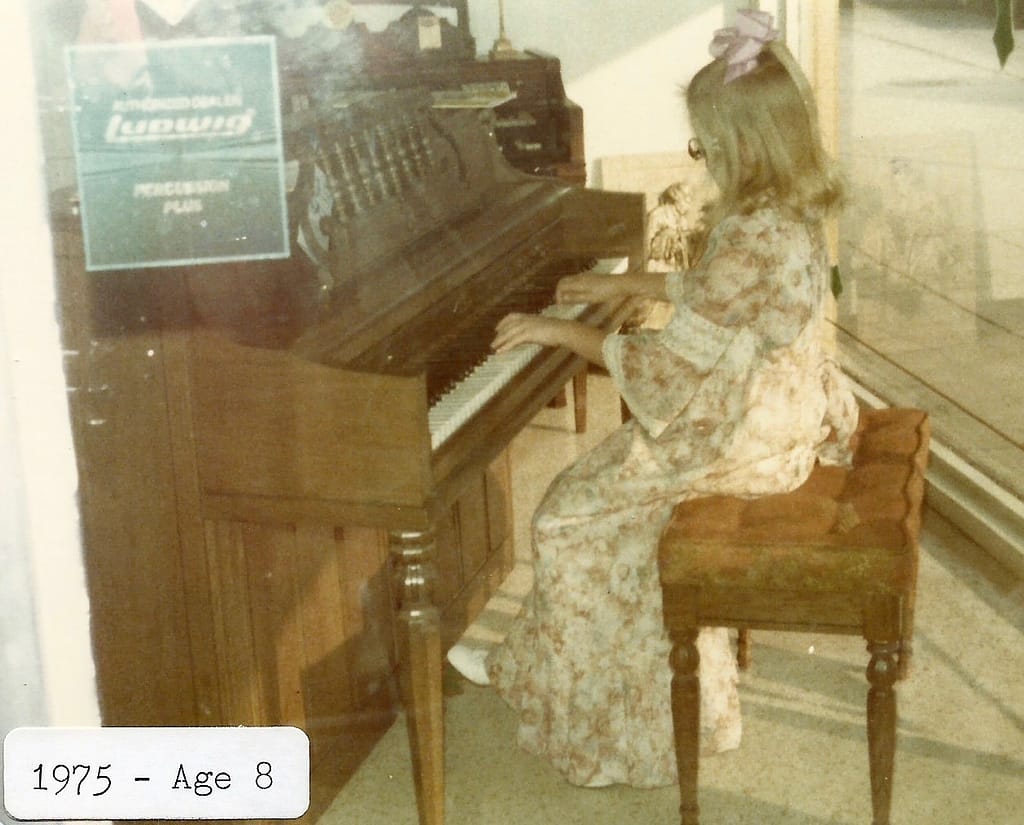 After each song, everyone in the store would applaud. And as people left, they would say, ‘Thank you!’ and smile.

I loved playing piano then. I’m sure I made mistakes, but I don’t recall them upsetting me. I just kept playing. I’d go home and practice for hours after one of those ‘performances.’

They were all fun, no pressure.”

High stakes performance pressure goes right along with my drive to impress the most important person in the room.

In retrospect, the Perfectionism, People-Pleasing, and Performancism are so obvious.

At the time, it was all I knew how to do.

I didn’t know that I could refuse to perform.

Looking back at my childhood piano-playing experiences, I see that I had too many high stakes performances but not nearly enough low pressure practice.

We can have too many high stakes performances but not nearly enough low pressure practice in any area of our lives, including (but not limited to):

The conversations I’ve shared with you here boil down to two “piano lessons”:

2)  You can refuse to perform.

Let me repeat that one again, for both of us:

You can refuse to perform.

What have been your experiences with high stakes performances?  What about low pressure practice?