I started playing piano when I was five.

At first, I loved it.

I loved my teacher. I loved practicing. I loved getting better and better.

Then came my first performance. 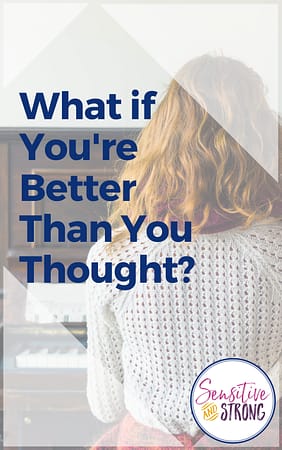 From Love to Terror

My fingers wouldn’t move my brain was a jumble my stomache wanted to hurl and I’d never experienced anything like it in my life.

I was that girl: the one you pity and dread, the one who started over.

Who finally fled the stage–no reason to curtsey!–and sat stoically through the rest of the recital until she could run home and cry.

My lessons continued until I was fifteen. Ten years of faithful practice and punch-in-the-gut performances.

I knew I was terrible because I screwed up at every recital.

At least I drove home feeling like I’d screwed up.

I was sure I’d done bad because I felt so bad.

Two years ago, I started taking solo performing classes. I’ve written and performed six monologues. And after every single one, I drove home feeling the same way.

But instead of believing I’d done bad because I felt bad, I remembered what my instructors taught me:

feeling “bad” is part of art

It’s what happens when you get on stage and open yourself up to an audience.

In fact, “bad” isn’t even the right word.

I was actually feeling vulnerable.

I wonder, now, if I was really as terrible at piano as I’ve remembered all these years.

What if I’d known that feeling “bad”––vulnerable, exposed, drained––after a performance is a perfectly normal part of making art?

What if I wasn’t terrible after all?

What if I was better than I thought?

What if I was (dare I say) good at piano but never knew it because I felt so bad?

What if your feelings aren’t telling you about the end result–-the food, the argument, the performance?

Despite how “bad” you may have felt, try asking yourself:

What if I really was better than I thought?

How might it change things for you to realize “I was vulnerable” rather than “I was bad” in art/heart situations?