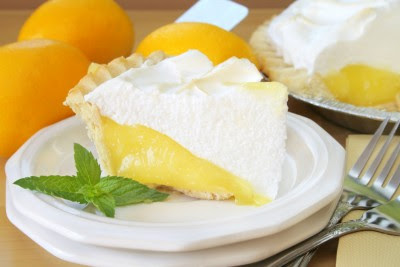 I have ninja pie crust making skills.
Not bragging, just truth-telling.
An amazing cooking class instructor taught me how to make the most delicate, flaky, beautiful pie crust the world has seen.  Every time.
I’ve never tried making lemon filling or meringue. But how hard can they possibly be?  My trusty red Betty Crocker cookbook is open. I am fearless!
I put together all the ingredients for the lemon filling and notice one minor item I’m missing:
a candy thermometer.
I’m supposed to bring the filling to a certain temperature and then cook it for a specific amount of time at that temperature.
Instead, I bring it to a rolling boil, stirring constantly.
For 30 minutes.
And oh, is it beautiful: yellow, clear, and glossy.
I pour the lemon mixture into the waiting perfect pie crust–mmmm, smells heavenly!–and bake as directed.
I whip up the egg whites with sugar, cool the pie, add the meringue, and brown it.
The finished pie is a work of art.
And I’m giddy with excitement over the surprise I’ve cooked up for Daniel.

Sure enough, he looks stunned and then thrilled when I present The Pie to him.
“You made this for me?” he exclaims.
I hand him a large knife. He calculates the perfect point to start cutting and stabs the knife into the center of the pie.
But as he lifts the knife, the entire pie comes out of the pie plate with it!
He gingerly settles the pie back down into the pie plate and pulls up on the knife again.
The knife is still stuck in the pie.
He wiggles the knife back and forth.
Still stuck.
Soon, it becomes clear that the pie–for all its beauty–is beyond all hope. The lemon mixture is the consistency of hard candy. How the knife ever went in, we will never understand.
But clearly, it is never coming out.

Daniel’s practical mind shifts from the pie to the knife, one of the expensive ones we received as a wedding gift.

He heads out to the garage, and I hear the banging of my rock-like pie being hammered against the side of our metal trash can.

Daniel eventually comes inside and reports that the trash can was badly dented in the process of freeing the knife.
I do what any rational bride of 3 ½ months would do:
burst into tears.
“I just wanted to surprise you for your birthday!” I wail.
Trying to cheer me up, Daniel holds out the knife and jokes, “Well, this certainly is a surprise!”
I cry even harder.

The “Lemon Meringue Pie Fiasco” has turned out to be an apt metaphor for our marriage.
We married young, stubborn, and foolish.
In the early years, we each tried so hard to do things to make the other happy.
But we frequently messed up.
And then our best attempts to clean up the mess caused a lot of collateral damage.
I took everything so seriously back then. Perfectionism insisted that the mistakes I made “meant something” about me, about our marriage.
I shed a lot of unnecessary tears.

In our quarter-of-a-century of marriage, I’ve learned…
(And I’ve definitely learned how hard lemon pie filling can possibly be!)