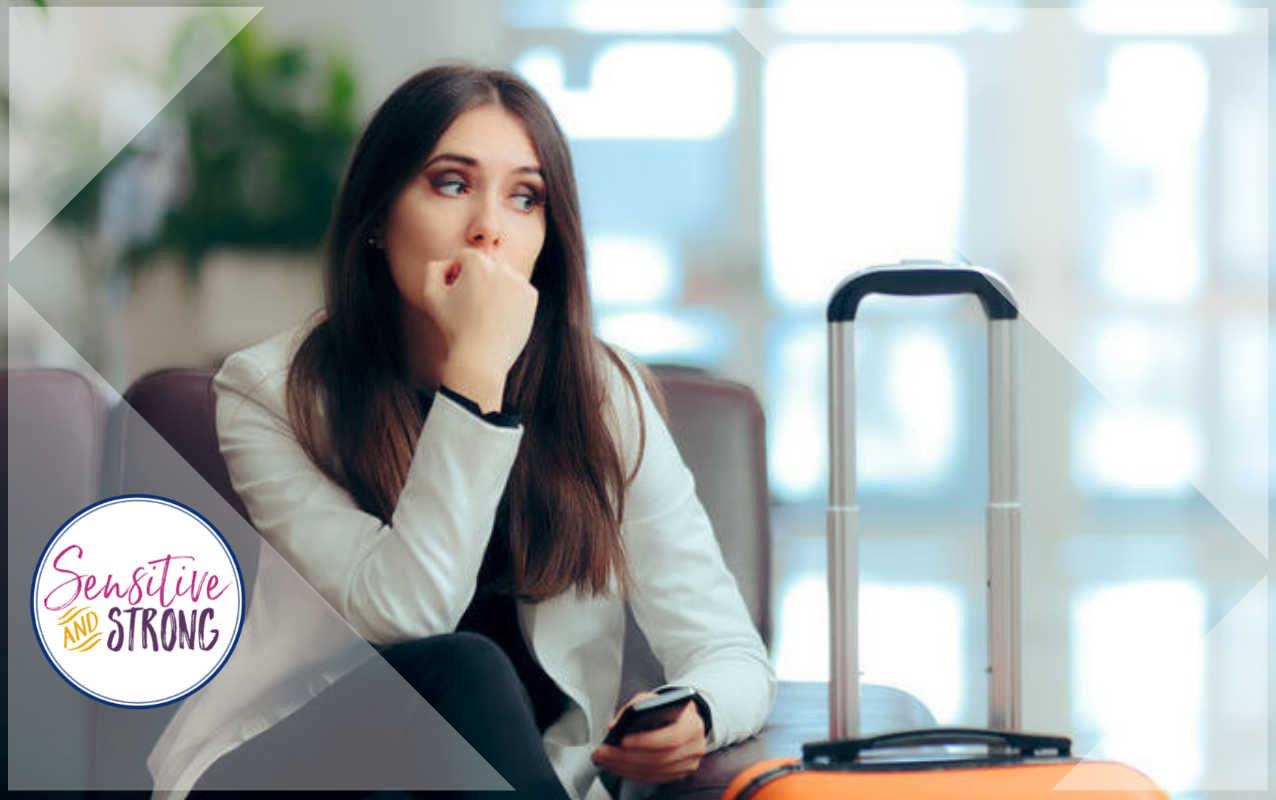 If up to 20% of people are HSP (in other words, HSP is not a rare trait), why do we HSPs feel so isolated? Is it because the other 80% are bullish and take over and rule everything?

This perceptive question landed in my inbox recently — perhaps it’s something you’ve wondered, too. Here’s my reply via video (if you prefer reading to viewing, keep scrolling for the transcript!)

It is Cheri, and I got a wonderful question by email a couple of days ago. Here’s what it says it says,

Cheri, if up to 20% of people are HSPs — in other words, HSP is not a rare trait — why do we HSPs feel so isolated? Is it because the other 80% are bullish and take over and rule everything?

And it got me thinking to years and years ago, I was invited to be a speaker at a juvenile diabetes fundraiser. And when I got there, the hotel was actually running a little bit late in having the luncheon ready.

And as the minutes ticked by, and it was actually starting to run a little later than you would have expected a professional hotel to be running, I noticed that the parents were starting to get paraphernalia out. And they were starting to engage with their children (because there were parents and children [with juvenile diabetes] there as well as potential donors.

And what I noticed was everything that was happening was very similar. Now I’m not even going to try to pretend that I know what was happening I now, in retrospect, am guessing there was blood sugar testing going on, and then snacks and stuff like that happening.

But what I remember is two things:

One is it seemed very, very normal, like everybody seemed to be doing the same thing.

And everybody was giving each other knowing looks like “Oh, yeah, this is what we’re doing. We all understand that this is necessary because the meal is running late. And so we have to check in on the on how our kids are doing.” There was just this bond of shared understanding that happened wordlessly, just because they were all going through an almost identical experience together. 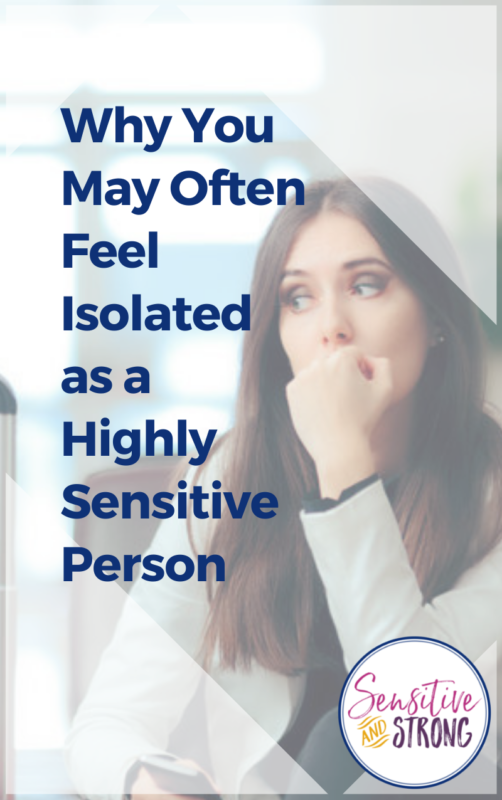 Now, I want you to contrast that scenario I just described to you with an imaginary scene, okay?

I want you to just imagine a typical church setting. And I want you to imagine that one HSP is sitting there, and she is getting a splitting headache, because the  teenage boy in front of her has decided to douse his body in Axe body spray. And the artificial scent of that is something she’s extraordinarily sensitive, maybe she is I call it being “scent-sitive.”

Now imagine that she’s sitting next to somebody who also is getting a headache and feeling oh, completely overwhelmed. But in her case, it’s because the drummer is being extra energetic this week with the praise and worship songs, okay.

And then I want you to imagine somebody to her right is also having a hard time dealing with her sensory overwhelm because up on the slides, where they are showing the lyrics to the songs, there’s a lot of flashing. And there’s video and there’s moving scenery. And so she’s having to deal with almost a feeling of … my mother used to call it “disembarkment syndrome” — almost like she’s, she’s kind of just just come off a boat, and this feeling kind of disoriented from that.

One of them cannot look at the other and say, “Oh, I know.”

And in fact, even if one of them turned to the other end said, “Yeah, that drummer is so loud!” The other person might say, “Oh, that’s not bothering me at all, I’m enjoying it.”

Or one of them might say “Isn’t that smell killing you?” And the others might go, “No. What smelling you’re talking about?”

And here’s the reason why:

We each have our own unique constellation of sensitivities. And so what one brain interprets as over-arousal — as being overstimulated — another brain may not interpret that way.

So we can all be Highly Sensitive Persons, we can all be at the same event, and be having a very different individual experience. But even if we’re having very different sensory stimuli that is causing that sense of overwhelm, that is the thing we have in common, okay? So we don’t have the experience that is necessarily the same but the consequences of the over-stimuli are very similar.

And so if we could find a way to be able to kind of sense “Oh, let me look around me and see if anybody else is looking uncomfortable. Is there anybody else who’s showing signs of trying to dial her sensitivity down and make it through the service?” (or whatever the event might be) Then we might be able to perceive other HSPs and feel less I isolated in the situation that we’re in.

So to me, this kind of helps explain why — even when we’re in the presence of other HSPs … And again, if we happen to be in church, statistically at least 20% of that that population, if not 25 to 30%, should be sister HSPs, or fellow HSPs. But we’re not going to notice it in each other because we each respond in our own unique ways to various sensory stimuli.

Okay, so the thing I want to wrap up with here, as far as what is the takeaway here, the takeaway is always, always always:

God created you sensitive and in Christ, you are always strong.

God created you on purpose as an HSP, for His purpose.

The difference that you have as an HSP is not a defect, that difference is divine.

And so in terms of becoming less isolated, one of the things that you can do is start just reminding yourself that you may be in some small way a representative of the other HSPs in whatever situation you’re in, and you may just not be aware of it. Start by assuming that they’re there.

One of the things I did when I was still teaching (this was quite a few years ago) was I started to look at a staff meeting of 40 people and doing the math and going “Okay, well hang on 40 times, point two is eight.” And so I just started assuming that eight to 10 to 12 people in any given staff meeting, were probably HSPs, just like me.(Not really “just like me” — obviously, they would have their own constellations.)

And so it gave me the courage to speak up. Like if I was feeling pressured to vote on something that had just been brought up, I would raise my hand and say, “You know, for those of us who need a little bit more time to reflect and to ponder and pray-cess and think of good questions to ask … and that we might have those questions and another day or two or three … could we delay this vote until next week?”

Now, that didn’t earn me any popularity points, but I will tell you what did happen. People started thanking me. Sometimes it would be a cell phone message, a text message, an email, sometimes it would be face to face. But often they would say “Cheri, you put into words what I was thinking for myself.”

And here’s the key thing they would say:

“I thought I was the only one.”

And then because I did that, I started being able to make some connections to others who felt the same way — who were reflective and needed time, who were more easily overwhelmed, who had higher highs and lower lows on the emotions, who were also very empathetic, and who noticed nuances.

So that’s my answer to the question of “Why do we feel so isolated?” as well as hopefully just a little bit of guidance on how to feel less isolated while also helping your sister HSPs and your fellow HSPs also feel less isolated.

I would love to hear your thoughts, your feedback, your input, your stories, your ideas.

And as always, remember God created you sensitive and in Christ, you are always strong. 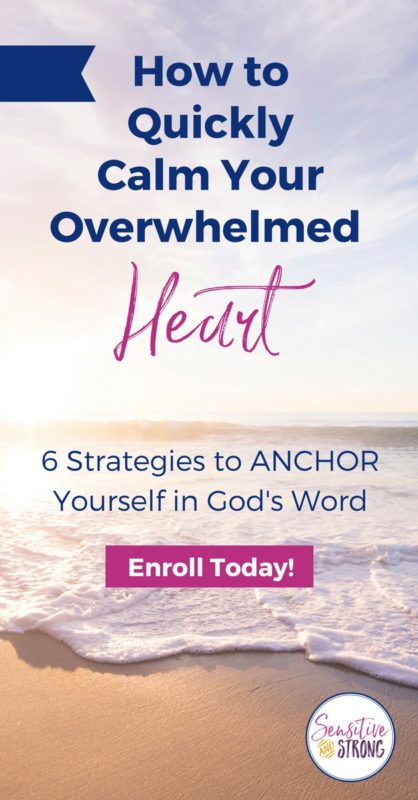